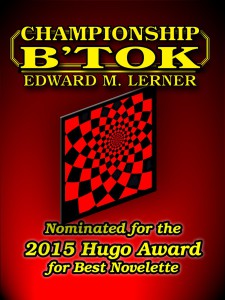 Nominated for the 2015 Hugo Award for Best Novelette! The name of the game is B’tok. It’s how the alien Snakes learn military strategy. B’tok is to chess as chess is to rock-paper-scissors. You do not want to tick off Snakes — especially when aggrieved Snakes may be the least of your worries. This thrilling adventures moves the story of the InterstellarNet forward as only Edward M. Lerner could do it. This special edition includes not only the text of the Hugo-nominated story, but also the version of Championship B’tok that forms part of Ed’s thrilling new novel, InterstellarNet: Enigma,published by FoxAcre Press.